We have been named as one of Greece's Best Workplaces for the 5th Consecutive Year!

Back to our news

Convert Group is delighted to announce that 34yr old Stefanos Prokos has assumed the newly-formed role of Director of Services as of 1st February, following 3 years of excellent cooperation with the firm. Stefanos will be responsible for 60% of the company‘s budget and will be in charge of all Consulting, Training & Recruiting services. At the same time, he has been assigned a position within the company leadership team, along with Panayotis Gezerlis, Elena Chailazopoulou, and Yorgos Panzaris.

He is an accomplished entrepreneur in the areas of Retail and Mobile Commerce and he has worked as a Product Manager at L’Oréal and as a Marketing Manager at doctoranytime. He holds an MBA International Degree from the Athens University of Economics and Business, in Strategy and Marketing.

Panayotis Gezerlis, founder and CEO of Convert Group, stated, “I’ve been cooperating with Stefanos for the last 8 years in different areas, and he has never ceased to amaze me with his skills and effectiveness in the projects he managed, but also with his integrity and quality of character. Thus, Elena and I, along with all BoD members who greatly appreciate him, decided to trust Stefanos with this role, in the frame of promoting many Converters to managerial positions. Stefanos takes over from my beloved colleague and friend, Manos Koumantakis, to whom I extend my warmest thanks for his contribution to Convert Group.”

Manos Koumantakis will be leaving Convert Group on the 29th of February and will continue working for the firm as an external partner. 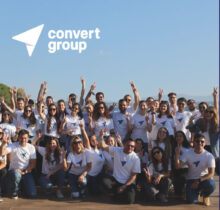 Best Workplace in Greece for 2022!

Preference center
Absolutely Necessary Cookies Statistical Cookies Behavioral and Marketing Cookies Contact DPO Privacy Policy Cookie Policy
The absolutely necessary cookies are essential for the proper operation of the website. Such cookies allow to browse and make use of the website’s functions. These cookies don’t identify you and without them the website cannot function and operate properly.
Basic
These cookies are essential for the proper operation of the website.
These are cookies that read the way that visitors use the website (for example which pages they visit, if they receive error messages etc.) Such cookies are used for statistical purposes and for the improvement of the website functions and performance.
Google Analytics
Google Analytics is Google’s analytics tool that helps website and app owners to understand how their visitors engage with their properties. It may use a set of cookies to collect information and report site usage statistics without personally identifying individual visitors to Google.
The behavioral and marketing cookies collect information regarding your actions in the website. The purpose of their use is to collect information such as the number of visitors, number of pages viewed etc., in order to improve our services, according to your preferences. With regard to advertisements, although this website does not normally host advertisements, when you visit third party websites or social media using advertisements, you might view an advertisement regarding our website and a product viewed therein.
Google Ads
Facebook Pixel Code
LinkedIn Insight Tag
Decline non functional cookies
Accept all
Cookies Settings